Trogir, a harmonious stone town on a small island that is connected to the mainland and the island of Čiovo by bridges. The old town, under UNESCO protection, is a treasure trove for lovers of art, Renaissance and Baroque buildings, Romanesque churches…

It is called the town-museum which is visible in the famous portal of Trogir cathedral by the craftsman Radovan in 1240, a Renaissance city lodge, the thousand year old Monastery of sv. Nikola [St. Nicholas] which has the ancient famous relief of Kairos preserved in it from the 4th century BC.

The small, narrow streets and small village squares, numerous restaurants, cafes, souvenir shops and galleries, along with numerous cultural and music open air events give this town a special atmosphere of the Mediterranean.

Trogir is an excellent example of urban continuity. The orthogonal street plan of this island settlement originates from the Hellenic era – consecutive rulers continued to decorate it with exceptional public and residential buildings and forts. Its beautiful roman churches are supplemented with exceptional renaissance and baroque buildings. The most significant building is the Trogir Cathedral with its west portal, a masterpiece of Radovan and the most significant example of roman and gothic art in Croatia. 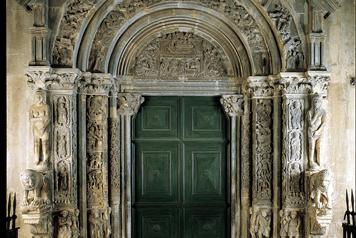