South of Brač lies Hvar, the longest island in the Adriatic. This is an island of vineyards, olive groves and lavender. Hvar is without a doubt an exceptional island. It is characterized by pleasant winter and summer resorts, mild climate and abundant subtropical vegetation.
The centre of the sunniest Croatian island of the same name – Hvar is a unique blend of luxurious Mediterranean natural surroundings, layer upon layer of a rich cultural and historical heritage and sophisticated tourism. Located in picturesque natural surroundings on the south side of the island, surrounded by mighty medieval walls, magical fields and the scent of lavender, Hvar is a never-ending treasure of monumental heritage, culture and atmospheres. Its name originates from the word PHAROS – the Greek name for the island of Hvar and the town which was formerly in the place of the present Stari Grad (the Old Town) from which it took over the title as island centre in the 13th century. From its castle Španjol, high above the town, majestic views open up over the green Pakleni otoci (the Hell Islands) (ACI Marina Palmižana) and the open sea. The main city square in front of the cathedral by the Arsenal and the oldest European theatre from the 17th century are a favourite gathering place for tourists. Many museums hide valuable works of art (The Last Supper from the 15th century in the dining room of the Franciscan Monastery) and the Benedictine Monastery, famous for its lace making from agave fibres, is often visited. 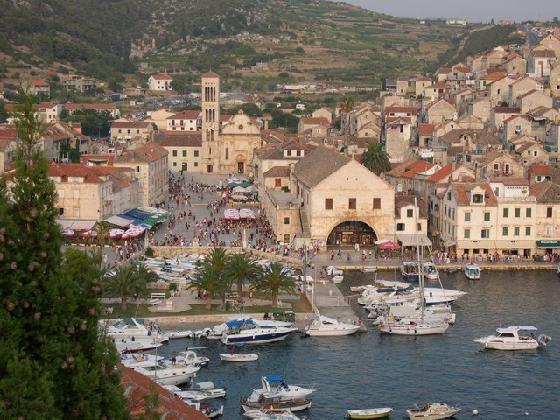