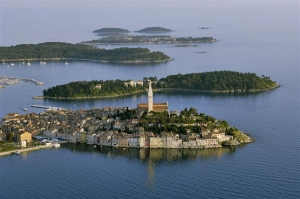 In the first records from the Middle Ages Fažana is mentioned as a small fishing town close to Vodnjan, after which the sea passage between land and the Brijuni Islands was named. Fishing was one of the important activities of the locals, which engaged almost entire families. While the men went fishing, women were responsible for cleaning their nets when they returned. The locals are still keen about fishing. Even today when passing along the waterfront by the small family-owned boats in the morning hours you will often have a chance to witness such a memorable sight.

There are many details that illustrate the significance of fishing in Fažana: fisherman’s fraternity “St. Andrew” during Napoleon’s rule, one of the largest fish (pilchard) processing plants in the Croatian Adriatic up to 1952, as many as 47 registered fishing boats in Fažana in 1910, as well as a shipyard for the construction and repair of fishing boats at the beginning of the 20th century.

Oily fish was mostly caught: pilchard, anchovy, mackerel… and sold to the neighboring population, used for the needs of hotels on the Brijuni Islands or the fish processing plant. But, fish from Fažana was exported as well. The regular boat service between Pula and Trieste also included Fažana as its port of call, so lobsters and crabs “grancevole” could be taken from Fažana to be served at banquets in Trieste and Vienna.

At the beginning of the 20th century in the coastal area of Valbandon there was a fish processing and ice making plant. It seems that the plant was not profitable enough, and so led to the idea of tourist orientation, which was at the time beginning to develop in certain destinations of the “Austrian Riviera”, especially Brijuni, Opatija and Lovran, Mali and Veli Lošinj, as well as Portorož.

Berlin entrepreneurs Gustav Klink, Emil Lauer and Jacob Cumar, owners of the already mentioned plant soon obtained, from the Ministry of the Interior, with the consent of the Ministry of Trade and Public Works, the necessary permit for converting the processing plant into a tourist facility.

So, in 1911 the stock company “Valbandon Erholungsheim und Seebad Aktiengeselschaft” (Valbandon – vacation center and seaside resort, stock company) was founded. The company was based in Trieste.

The stock company had a capital of 45000 crowns divided into 2250 stocks of 200 crowns each. The company Statute was also approved. Payments for stocks could be made at the Bank of Styria. The company president was the (former) minister of railroads Emil Freiherr von Guttenberg from Graz.

In 1911 Valbandon was mentioned as a seaside resort in the directory of the Austrian illustrated monthly magazine “Adria”. In 1912 that same magazine presented promotional information about Valbandon: it had a nicely arranged beach with 45 cabins, the hotel “Valbandon” was opened on June 1, 1911 with four annexes and among them “Villa Maria” was especially worth mentioning. The hotel and villas had a capacity of 60 rooms.

Where the green hills meet the sea, where nature and heritage become one, you will find Labin and Rabac – paradise for artists.

The old mediaeval town of Labin is filled with art ateliers, in which you can feel what it means to be at the center of art itself. Here you can not only look at art works, but experience them, live them…
Touch of art

Labin is situated on the eastern coast of the Istrian peninsula, only 40 km away from Pula and 60 km from Rijeka. This historical and administrative center of eastern Istria, used to be inhabited as early as 2000 BC. Taking a walk through the Mediterranean and European history, your attention will be drawn by the Municipal Loggia and numerous palaces, mediaeval fortifications with Renaissance bastion, and the 17th century church tower – the highest point from which one can see Rabac and Kvarner bay.

From the magnificent belvedere you will see Rabac, once a small fishing place, today a beautiful tourist destination with excellently preserved environment which secured it the title of “The Pearl of the Kvarner bay”. It reveals itself to you in all its magnificence, showing its many beautiful beaches, carefully maintained and equipped with everything needed for your most pleasant stay at the seaside. The beaches have lifeguards and are marked with Blue flags. One of them is Maslinica, specially equipped for disabled persons with accompanying programs. Numerous restaurants along the promenade and in the center, offer various gastronomical specialties, among which the Kvarner scampi, the most appreciated product of the Adriatic sea. Rabac offers pools, a waterslide, tennis, table tennis, mini golf, beach volleyball, diving, water sports, and games for children.

Should you choose to go further from the coast, you will find peace and quiet in the intact nature. You can take the hiking path, Labin hiking trail or the mountain-bike trails. You can choose from numerous boat excursions such as the dolphin-safari, excursion to the island of Cres, a visit to Venice by catamaran, and so on…

If you especially enjoy the sea, you will love the sailing boat regatta or the race of the rowboats, accompanied by lovely Mediterranean melodies. Those who prefer the night life will especially enjoy Rabac. There are discos, beach bars and numerous top music events 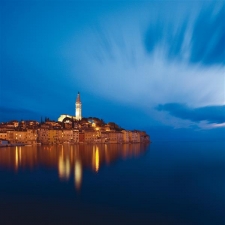