Because of its central position on the eastern coast of the Adriatic sea, the district of Split and Dalmatia has always had an extraordinary cultural and historical role. This entire rounded area consists of a wide hinterland through which flows the river Cetina, and of a coastal belt with an archipelago with many islands. Generous nature has garnished this rich and heterogeneous area with hidden bays, beaches, cliffs, karst, emerald groves, sea straits and vast high seas. The islands of Brac, Solta, Hvar and Vis are wide, with beautiful landscapes and hierarchies of bigger and smaller settlements. The towns and smaller settlements seem to be threaded on a string along the coast. The hinterland, to which even the breath of the Mediterranean reaches, consists of a mountainous landscape with karst, wide fields and settlements, among which Sinj and Imotski have got urban characteristics.

On the coast, the crossroads of continental and sea – ways, during the prehistoric and ancient era, the town of Salona has developed as the metropolis of the Roman province Dalmatia, whose role was taken over by Split in the early Middle Ages.

From the 5th to the 2nd century B.C, the Greek colonists have founded some urban settlements on the islands and on the land. The emperor Diocletian, who was of Dalmatian origin himself, has had a huge palace built, into which he withdrew in the year 303. The Diocletian’s palace became the centre, out of which the medieval town of Split has developed. Therefore, it is understandable that the medieval Croatian rulers have had many churches and mausoleums built on the ruins of Salona, near Split.

This extraordinary beautiful area abounds in cultural monuments. The Diocletian’s palace is recorded into the UNESCO register of monuments of universal importance. The peculiar characteristic of this area is the masonry, because this region abounds in stone. No wonder that many famous builders and sculptors originate from this area. The most famous monument of the Dalmatian masonry is the portal of the cathedral in Trogir, which was chiseled out by the master Radovan in the 13th century. However, worthier than single buildings are the rural and the urban settlements in this region, fused with its natural frame, with rounded contours and polished masonry, which can be considered collective pieces of art.
Trogir with its condensed contours, situated on a small island seems to be a castle on the water with the prisms of its towers and crystals of its bell – towers.

Split, which has developed out of the Diocletian’s palace is the most imaginative town of Dalmatia, with complicated spatial relationships, medieval houses and churches built on the ruins of imperial chambers. Split is therefore a town with secret historical semantics, especially concernlng imperiai memories.

The tiny town of Omis under the fortress situated on the mouth of the river Cetina has got an almost pathetic scenery with cliffs and rocks in the background. 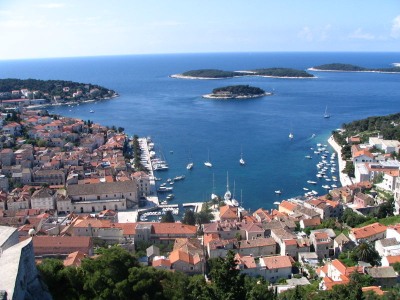