The island of Mljet, the most beautiful and most forested island in the Adriatic, is one of the most beautiful pearls of the Mediterranean. Isolated and untouched, the island’s mysticism, olive groves, vineyards and rich forests are ideal places to research the rich flora and fauna, and to peacefully enjoy the pristine beauty of the natural surroundings.

It was already mentioned in the fourth century BC in Greek writing, and the numerous Greek amphora and shipwrecks along the coast of Mljet are evidence that Greek sailors stayed on the shores of Mljet during their journeys.

Mljet National Park makes up most of the island, and there are several villages, two salt water lakes – Veliko and Malo jezero, and a Benedictine monastery on the island of sv. Marija [St. Mary] in Starigrad. In Polač there are some of the best natural anchorages in the Adriatic.

Preserved from the Illyrian period, there are many fortifications and tombs, and the best preserved are those on the hill of Veliki Gradac, Veliko jezero and the fortress at Vodice, above the water source at Vodice at Babino Polje. The Roman Palace, which is the largest after Diocletian’s Palace in Split and the Arena in Pula, is a part of the valuable heritage of the island of Mljet.

If you stroll through the island of Mljet, you will see the goats, sheep, donkeys, which in these beautiful fields offer a welcome to all who visit. 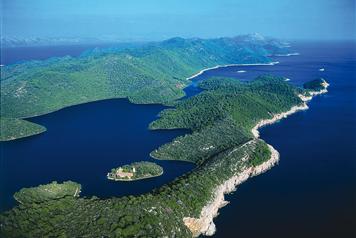