Central Croatia is the area lying in the valleys of the rivers Sava, Drava and Mura. Visiting it means getting to know the continental character of the country, see the lowlands that are so ideally complemented with mellow hills and mounts the slopes of which are mostly covered with vineyards, walk the forests of oak, beech and other deciduous trees, visit medieval burgs, castles and manor houses.

Have you always longed for a holiday away from the summer heat and the vibrant atmosphere of the Mediterranean in an idyllic, green and hilly environment with ancient woodlands, vineyards and rivers? Do you favour the tranquil and soothing atmosphere of the mainland, where romantic medieval towns, summer homes and manors dot the countryside? where thermal springs, health spas and places of pilgrimage beckon? In that case, you should set out to the north of Zagreb and enjoy the blessings offered by Central Croatia.

Zagreb is the capital of the Republic of Croatia, its almost a million strong political and diplomatic, cultural, economic, mercantile, transport & communication and sports centre. It is a town of contrasts – young and old at the same time, dedicated to business in the morning, relaxed and fun loving in the evening, a typical European metropolis in many ways but at the same time it is city its guests remember for the charm of its centre and hospitality of its citizens.

Zagreb, Croatia’s capital and the largest city in the country, is a typical Central European town. It grew out of two medieval settlements that flourished for centuries on neighbouring hills. Zagreb’s written history dates to the year 1094, when a diocese was established there. The classicist and secessionist facades of its historical nucleus exude the lofty spirit of the Austro-Hungarian Empire, but here and there one can also discern the contours of the panoramas of Prague. Almost all of the main sites of the city and cultural venues are located in the very centre, which teems with charming coffee houses, fine restaurants, garden restaurants, and lovingly tended parks like, for instance, Ribnjak, which lies beneath the walls of Kaptol. The pivotal point of the city is the magnificent Gothic cathedral with its filigree spires. Zrinjevac, a park located only a few steps away from the main square, also forms part of the Lenuci green horseshoe that encompasses some of the most beautiful buildings in town. Zagreb, indeed, is a city tailored to the human scale. 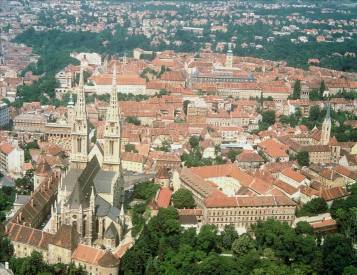