Plitvice lakes – a natural phenomenon is a jewel of inestimable value. Between Mala kapela and Plješivica, in the area where the river Korana has its source, there are 16 large and a lot of small lakes which are connected by small, medium and large waterfalls after which the river Korana continues its journey to Karlovac.

Due to the natural beauty of the waterfalls, cascades, caves and rocks, which offer a beautiful mosaic of colours, sounds and shapes surrounded by high mountain forest terrain, Plitvice lakes and its surroundings were in 1949 declared a National Park, and since 1979 have been under the UNESCO protection. This largest and oldest national park only has electric trains and boats that transport its visitors to various destinations, after which tourists can continue their sightseeing by walking on the narrow paths and trails, crossing wooden bridges that are just above the water surface.

The park is open year round, and is most pleasant to visit during the summer months, but the winter months also leave visitors breath taken when they see the frozen waterfalls. If you choose to spend a few days within the National Park there are several hotels and national restaurants, and accommodation is possible in family homes in the area.

A wondrous creation of forest landscapes snuggling between the mountains of Mala Kapela and Plješivica; a system of sixteen lakes interlinked by numerous waterfalls. The largest and highest of these lakes, resting on a dolomite bed, are Prošćansko jezero (639 m) and Kozjak; the lower lakes, covered in a layer of limestone, splash in a waterfall 136 m down, from whence the River Korana issues. The area also includes the primeval forest reserve of Čorkova uvala, where 120 types of bird and numerous caves still further enhance this unique landscape. The mountain climate makes for snow and ice across the mountains, forests, lakes and waterfalls from November to March. This park offers quite the most beautiful cycling and walking paths anywhere in Europe. If opting to travel instead by canoe, a special permit is required. 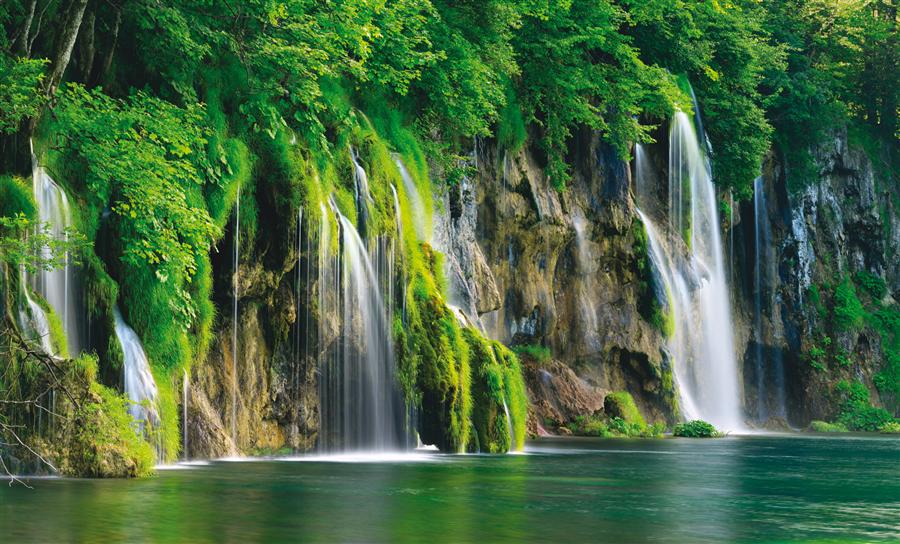