Cycling
From the macadam field trials ideal for mountain bikes to the asphalted roads for family sightseeing, cycling in Croatia offers huge variety of ideal trails for everyone’s taste. Note: After Eddy Mercx, the five-time winner of the Tour de France, said it would be “wonderful if a big race was ridden here”, in 2004 two stages of the famous Gira d’Italia were ridden in Istria.

FROM THE NORTH TO THE SOUTH, from the eastern to the western Istrian coast, on nearly 2,600 kilometres spread the already plotted sixty bike trails. Istria County Tourist Board has published so far six brochures entitled “Istria Bike” with trails plotted in detail and descriptions of mostly circular tracks stretching on 1,500 marked kilometres. Other bike trails, yet to be plotted, have covered all Istria like a spider web.

About 70% of the trails are mountain ones, i.e. unpaved or forest trails, while others are paved. The most demanding trails are surely in the highest parts of Istria, Ćićarija, and require top fitness and skill.

In the immediate vicinity, in the Labin region are several other demanding trails, from Gračišće to Rabac and from Rabac to Skitača. They require not only good will as they are not recommended for recreation tourists. However, both for your heart and soul we recommend you take the easiest and also the most attractive trails that meander along the Istrian coast – along Cape Kamenjak, from Rovinj to San Pol Cove and around Vrsar and Poreč.

FROM THE EASTERN TO THE WESTERN ISTRIAN COAST there are 430 kilometres of bike trails divided into ten sections – from Rovinjsko Selo over Kanfanar and Bale to Svetvinčenat, Barban, Gračišće, Raša, Labin and Rabac. Although easy in the beginning, heading east the trails become more demanding requiring of course good physical conditional. Your arrival to the eastern Istrian coast will be rewarded by a splendid view of the magnificent landscape. There you can find small coves and completely isolated beaches that will grant you privacy 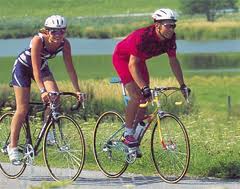